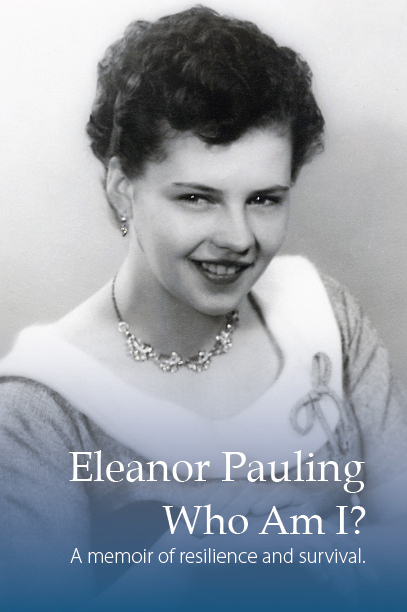 Eleanor Pauling is a long-time resident of Owen Sound. As she approached her 80th birthday, she felt it was time to write her memoirs. This has taken the form of “Eleanor Pauling – Who Am I” in which she shares her story.

Throughout the years, people who had stayed at her Diamond Motel, visitors to her Bridges Art Gallery, fellow artists, friends and especially her grandchildren, were always telling her that she should write her stories down. Knowing she might be running out of time, she felt she had better get it done. More importantly, she was worried, “When I depart this life, will my children or my descendants really know me?”

She knew that it might be a daunting task. Glad that her parents had both shared stories about her determined ancestors, she started there. She was surprised at how well the memories came. As she wrote about her personal journey through a life filled with trials, tribulations, sadness, joy, and many successes, she realized that it could be an inspiring story to others, and was even more motivated to finish the project. After finding Judy Suke, a manuscript developer, she was able to complete the book, and feels that it is her greatest accomplishment.

Now at the age of 82, Eleanor wants others to know that it is never too late. As the saying goes. “Where there is a will, there is a way.” She says, “With determination, you will prevail, as shown by the seven generations in the book.”

Ruth Lovell Stanners, former Mayor of Owen Sound says, “Eleanor Pauling – Who am I?… is a truly remarkable book. It is the story of Eleanor’s journey through an incredible life; a story told with honesty and love, and at times great sadness and at other times pure joy. It is an inspirational story of resilience and survival, but above all, a story of the unconditional love of a mother for her children.”